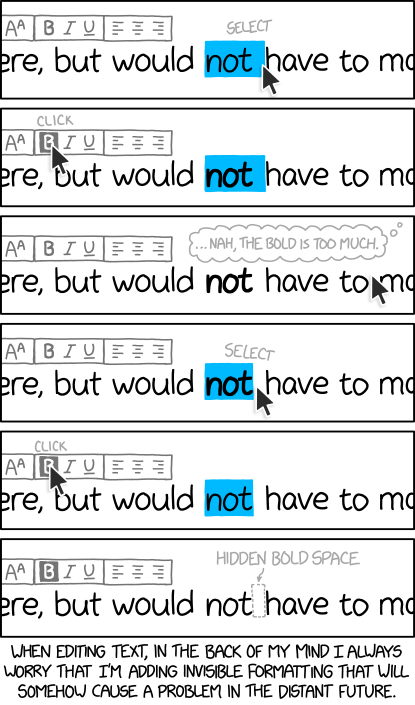 reply
I have my whitespace set to visible in my IDE for exactly things like this. And yes, WP5.1's reveal codes was a similarly useful thing. WYSIWYG is far inferior to WYSIWYM.
Colorado Plateau

God, I miss "Reveal Codes" from WordPerfect. It made fixing formatting problems *so* much easier over watching your entire document re-format because you delete a single paragraph break.

duerig
I thought about reveal codes as well when I saw this. I miss it sometimes, but it always brought out my OCD side. I was always tempted to spend time erasing codes that didn't actually impact the document.

fallinghawks
Reveal codes was awesome. My memory is of when word processors started to be able to apply HTML. An instant shitshow of massive amounts of repeated inline styling for a single character. You could not find the actual text in the mess.

And this is why web developers keep opening the developer tools to look at the page markup, and why grey-beards fondly remember Word Perfect's "Reveal Codes" feature.

alt_text_at_your_service
reply
To avoid errors like this, we render all text and pipe it through OCR before processing, fixing a handful of irregular bugs by burying them beneath a smooth, uniform layer of bugs.

A List of the 100 Most Important Technologies Ever by Jason Kottke
Thursday January 3rd, 2019 at 2:34 PM

From Paleofuture, “Technology, Ranked”, a list of the 100 most important technologies ever invented by humans. Among the items on the list (one of which is the top pick) are the fork, the electric guitar, cotton gin, nuclear weapons, anesthesia, GPS, Prozac, and the wheel. Fire is #2:

Ancient peoples harnessed fire in ways that allowed them to control their environment. For example, aboriginal Australians were able to keep bushfires under control by shaping and manipulating what they destroyed-reinvigorating the land and limiting the number of fires that had the potential to get out of control.

How to overcome procrastination by Jason Kottke
Tuesday August 16th, 2016 at 4:19 PM

Tags: how to   video
Read the whole story 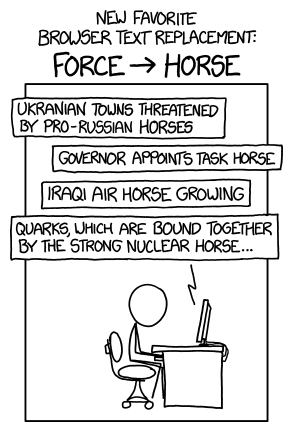 fancycwabs
Horse IS equal to mass times acceleration, after all.

Legal contracts will include clauses regarding Horse Majeure.
23231

0utis
May the horse be with you.

I assume this browser extension will be released this afternoon.
Boston, MA 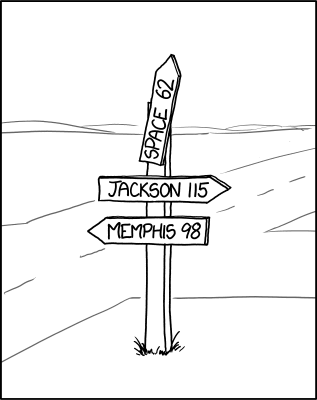 fancycwabs
reply
What's an astronaut doing in rural Mississippi? Did they get kidnapped?
Nashville, Tennessee

fancycwabs
ON THE OTHER HAND, if you meet Satan here and ask him to tune your guitar, you'll gain fantastic musical powers.

sabinn
I dont get it

2 Comments
The Vitamin Myth: Why We Think We Need Supplements:

A fascinating and potentially important read — especially if, like me, you’re a vitamin taker.

ceeeeej
reply
Wow - "In 2007, researchers from the National Cancer Institute examined 11,000 men who did or didn't take multivitamins. Those who took multivitamins were twice as likely to die from advanced prostate cancer."

Some studies say multivitamins have no effect, some say they potentially increase risk to die from cancer. Now I'm wondering if they increase the risk to get cancer in the first place?
Taipei, Taiwan